I love California; I’m a born and raised California girl. I love the weather, the beaches, the mountains and the people. As much as I love the Golden State, when it comes to firearms there are a few laws and regulations that confuse me and make me wonder 'what were they thinking?!?!'. Like, did you know that in San Francisco you CANNOT walk an elephant down the street in the downtown area, or that you can legally drive without your seat belt on IF you are taking clothing on or off!

California's gun laws have become somewhat of a joke amongst most other states; I think it comes second to 'a blonde, a brunette, and redhead walk into a bar...'.  Most of the time I can kinda, sorta, maybe  see where they were coming from when they formulated these laws. Sometimes I can see the good intention that was behind these regulations... but then there are the times where I can't wrap my mind around what I just read, let alone believe that it’s actually into legislation.

I could probably go on for days with ALL the gun laws that are downright ridiculous, but instead I have chosen a few that make my head hurt when I think about them

UNSAFE OR LAW ENFORCEMENT GUNS:
So California has this super cool lame list of guns that are APPROVED to be sold to the public. Which means guns not on this list cannot be sold. Every gun to be sold in California has to go through a series of tests to deem it safe. Among the reasons a gun can be held off the roster are frame color, lack of a physical safety, failure to pass the "drop test" aka destroy a gun this gun to see how safe it is, or the manufacturer just doesn't want to pay an annual fee to have their gun to be sold in California.

Here's the part that gets confusing... if these guns are deemed "unsafe" they can only be sold to police officers. Don’t get me wrong, I know police officers are trained to protect and serve, but I fail to see how these guns are magically safe in a police offers hands but dangerous death machines in a law abiding citizen's hand. I've seen some of the targets of officers after target practice.. and I don’t always feel safer. I also fail to see how a color of a gun makes it unsafe. I just want a pink gun, is that so much to ask for?!

10 DAY WAITING “COOLING OFF PERIOD”:
Back in the 90's a waiting period or "cooling off" period was instated with the intent that it would deter or give the purchaser time to calm down and not make a gun purchase out of anger or heat of the moment. I can accept the logic of having a background check for firearms, I can understand the logic for some sort of waiting period before picking up a firearm just in case someone is in an emotional state that may affect their judgment.

What I don't understand is having responsible guns owners with previously registered guns having to go through the whole process every time. A quick call to the  DOJ/ATF to make sure that no felonies, misdemeanors, or restraining orders have been filed or have been convicted of since their last gun purchase, no problem. But why do they have to wait 10 days for something they already have at home?

We all know that if someone genuinely wants to do harm they will find a way. Shoot! if I didn't like my high heels so much I would use them instead of a gun in the heat of the moment because I don’t have to wait to take home heels.

SAFETY FEATURES AND MICRO STAMPING:
In order to "make California safer", we have a ridiculous list of safety "guidelines" that gun manufactures must install or incorporate into their guns to be eligible for sale.

The concept of micro stamping in California firearms is just more feel good California hippieism. The basic idea is that the firing pin will punch a small identifying number of the primer of a spent shell so that if used in a crime the owner can be found easier and sooner. Cool idea right? But, but... the firing pin is a wearable part so after a while there will no longer be a number to stamp just a black shape. Let's not even talk about criminals simply picking up their brass or filing down the micro stamp on the pin. I think you see where I’m going with this... it's stupid.

Now if your head isn't already hurting from reading this, I've saved the best and my favorite for last.

FEDERAL AGENTS AREN'T ALLOWED:
In the great state of California, federal agents can NOT register off roster guns, they cannot register more than one handgun at a time, and they cannot register and take home the same day, and I cannot sell them high capacity magazines either. The reason I love this one so much is the irony of it. If an ATF agent were to walk into my shop and buy a gun he/she gets treated like a civilian. I giggle so hard at this one; unless you are a sworn peace officer in the state of California you have no exceptions to any of our laws and regulations. 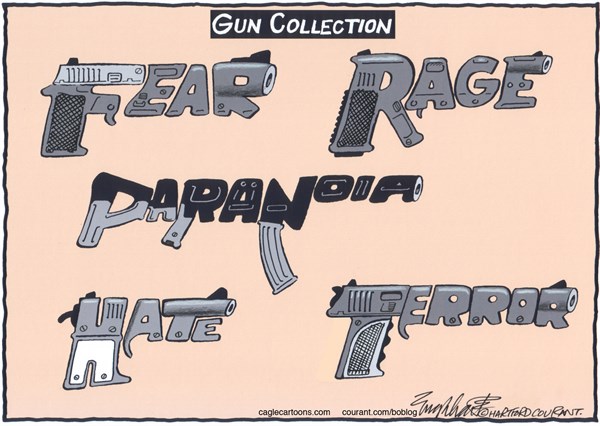 It seems like cars and guns are following the same trend -  taking the responsibility away from the owner. Cool I’m not responsible for my actions anymore, YAY!, I don't have to know how parallel park, look in my side mirrors or behind me as I back up! Just like I don’t have to make sure my gun is safe because my loaded chamber indicator tells me if it is or not, a magazine disconnect safety or bullet buttons. If we are always taught to look both ways before pulling out into traffic and if we are always taught that I am the reason my gun is safe then why, for the love of everything 2nd amendment related, would this even be an option?!