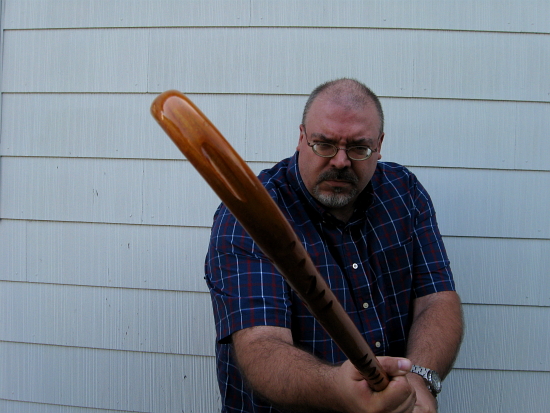 Tags: naked, cane, Sacramento, California, defensive gun use,
3:30 Sunday afternoon (January 20th) was normally a relaxing day. The Niners and Falcons were playing and the weather was pretty good across the country. It just wasn't a time you expect craziness to happen.

A Sacramento, California man was opening the gate to his driveway to go out with his wife when another man walked up acting delusional. The homeowner told the man to leave and the nutjob started to comply.

As the man started to walk out the gate he quickly turned around, removed all his clothing, took a fighting stance and pulled out a cane.

Go ahead, read it again. See, you can't stop crazy.

So the naked, cane-wielding nutjob attacked by charging the homeowner and swinging the cane erratically and breaking things in the yard. The homeowner grabbed a 2x4 and backed up deeper into the yard as the naked man began picking up large objects and throwing them at the homeowner.

The homeowner quickly ran into the house to grab his gun and came back out, not wanting to leave his wife locked in the car with the nutjob around. As he came out with the gun, he was confronted with the nutjob trying to throw a piece of wrought iron fence at him.

With a single shot to the abdomen, lucidity beat insanity.

Police arrived, the crazy man was taken to the hospital where he would later die.

As we've always said, crazy is crazy. There is no rational explanation for it.