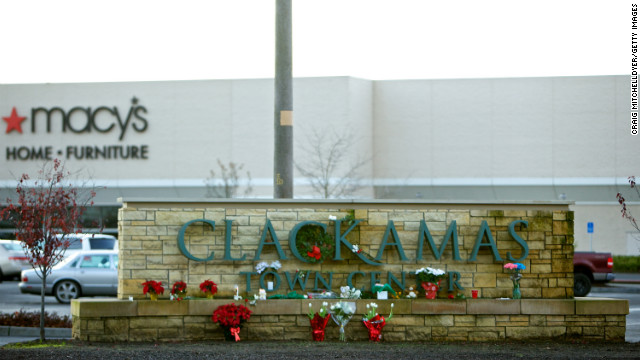 On Tuesday night 22-year-old Nick Meli went to the Clackamas Town Center mall with his friends Casey and Ashley as well as Ashley's four month old son***. They were walking through the mall when a masked man, now known to be Jacob Tyler Roberts, opened fire.

Nick's reaction? "I heard three shots and turned and looked at Casey and said, 'are you serious?'". Nick told Casey to get down with the baby and positioned himself behind a pillar in the mall. Oh yeah, Nick is a licensed concealed carrier in Oregon.

When Nick looked around the pillar he drew his concealed handgun. When the shooting suddenly stopped, what we now know was Roberts weapon jamming Nick saw him trying to clear the malfunction, "He was working on his rifle, he kept pulling the charging handle and hitting the side", Nick told reporters.

Click here for the amazing full story of Nick's actions that night based on interviews with Nick, Casey, and Ashley

Roberts and Nick clearly saw each other and as Nick lined up the shot, he knew there was a problem, "As I was going down to pull I saw someone in the back of the (shooter) move and I knew if I fired and missed I could hit them".

Unable to safely take the shot without risking innocents (Colonel Jeff Cooper's Firearms Rule #4 for those counting), Nick took cover inside a store. He stands by his choice not to pull the trigger, saying "I'm not beating myself up cause I didn't shoot him, I know after he saw me I think the last shot he fired was the one he used on himself".

That's right... even though Nick never fired a shot, Roberts knew that he was no longer the only armed man in the mall. Roberts retreated into the stairwell, cleared his weapons malfunction and committed suicide rather than continue attacking and killing any more innocent civilians.

UPDATE: We spoke with Nick, Casey, and Ashley late Sunday and got the entire, amazing story of Nick's actions stopping the gunman in the Clackamas Town Center shooting.

Click here to read the Full Story of Nick's heroic actions based on interviews with Nick, Casey, and Ashley


If you're interested in other stories of ordinary citizens using their firearms to defend themselves, their families, and their friends, take a look at our December 2012 Defensive Gun Use Report - release January 5th!

To stay up to date on this and other stories

***UPDATED @ 6:17P.M. Thanks to Casey for clarifying that the child was a friend's child and was a boy rather than a girl