Tags: concealed carrier, concealed carry, two intruders, home invasion, defensive gun use, dgu, Detroit, James Cr,
"He struck both men, killing them instantly," said Detroit Police Sgt. Michael Woody. Tuesday morning around 10:30 a Detroit, Michigan homeowner heard a ruckus near his side window. He grabbed his handgun and went out the back door so he could swing around and come up to the window from the side.

As the homeowner spotted two men trying to break into the home, a fight broke out. The homeowner, a concealed carry licensee, drew his handgun and fired four rounds - killing both intruders instantly.

Just like our other defensive gun use from Detroit this week, this was the second break in of the property in less than a week.

"I was sitting in my office, and I heard four shots, and I didn't think much of it," Pastor Barak Holmes said as he stared the scene of two dead home invaders behind a pickup truck. "It's horrific what's going on in the city, where people have to defend their homes with guns. We have to pray for our city."

Chief of Police James Craig has been a vocal proponent of citizens defending themselves from the plague of violence Detroit is facing. "People who are faced with a dangerous situation are taking matters into their own hands," Craig said. "We’re not advocating violence; we’re advocates of not being victims. We’re advocates of self-protection. We want people to be safe." 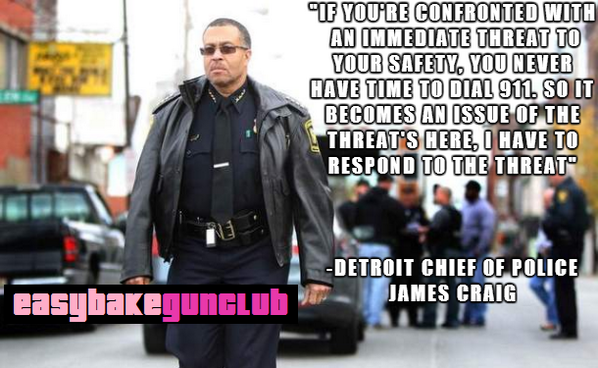