Tags: Canadian gunman, Justin Bourque, RCMP, Mounties, rifle, gun control, mass shooting,
These stories are always tragic and we're not minimizing that tragedy in any way. We just want to point out the lunacy of thinking that regulating firearms will stop someone from lashing out violently.

The quick facts as they stand right now:
"The RCMP received a call at 7:20 p.m. Atlantic Time of a man wearing camouflage clothing, carrying firearms, and walking into the woods," Staff Sgt. Julie Gagnon said.

That's when 24-year-old Justin Bourque's shooting spree started and Mounties are still actively searching for him almost 12 hours later. Three officers are dead with an additional two officers wounded from shootouts with Bourque. 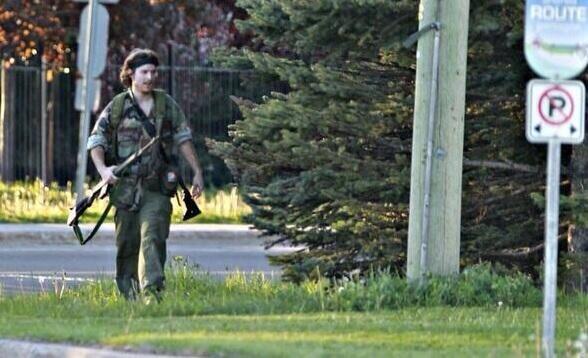 Construction worker Danny Leblanc, 42, said he saw the shooter in the distance on Wednesday evening wearing a camouflage outfit and standing in the middle of the street with his gun pointed at police cars. He thought it was an RCMP officer until he heard a burst of automatic gunfire that sent him running into his home, where he remained behind locked doors with his family.

As of 4:40a.m. EST RCMP was still searching for the shooter and asking people to stay locked in their homes as well as asking people not to say where police are located via social media. We keep the officers and their families in our thoughts and prayers and hope Bourque's rampage is brought to a quick end.

To the gun control advocates who truly do believe that more "sensible" regulation can stop people from violently evil acts, remember that Canada has:

- A 60-day waiting period to buy a gun
- Spouse or next-of-kin notification prior to granting a license to own a gun
- Mandatory licensing for gun owners
- Required safety training courses
- A comprehensive background check focused on mental, criminal and addiction histories.

From sticks and stones to spears and swords through rifles and handguns, violence is the choice of man. To condemn an object for the choice of man is to address the symptom and not the disease.