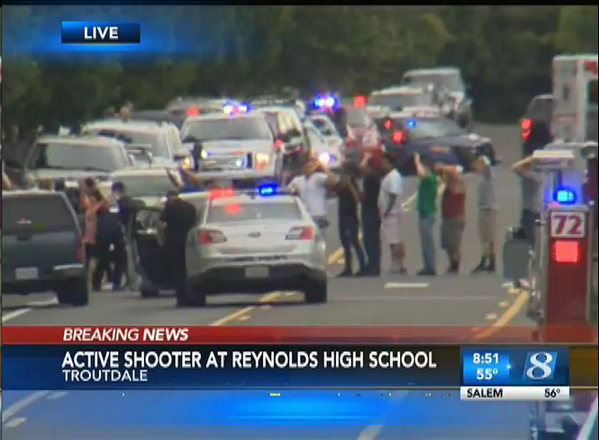 Tags: Reynolds high school, active shooter, ar-15, ar15, gunman, good guys with guns,
DISCLAIMER: As always in these situations rumors swirl so we will keep this report as up to date as possible throughout the day.

We are awaiting details but there was an active shooter situation at Reynolds High School in Troutdale, Oregon.

Multiple agencies responded to the scene - sixty police and sheriff's units were on hand, as well as 19 medical personnel. A LifeFlight helicopter landed in a nearby field, according to the station.

At 10 a.m., police confirmed that one student had also been killed. The students names and genders have not been released.

Tactical efforts have concluded. The situation is stabilized, according to police.

SWAT teams were working their way through the school, releasing students from classrooms who are leaving with their hands over their heads.

According to initial reports there were three gunman. One gunman was killed on the scene, a second gunman was caught at a nearby church, and a third gunman fled the scene.

Initial reports of multiple gunmen have not been confirmed. It has been confirmed that a teacher was also wounded in the shooting.

It is now confirmed that two School Resource Officers engaged the shooter in "under a minute" and ended the threat. A good day for good guys with guns!