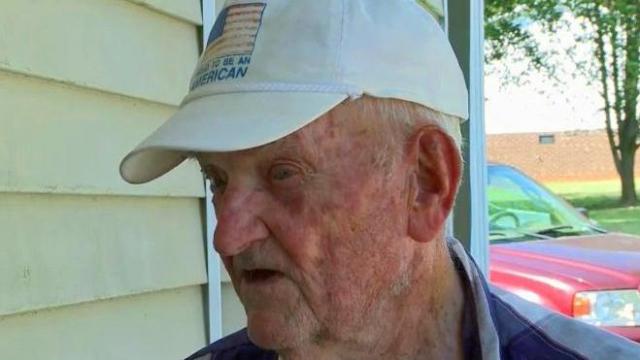 Tags: Calvin Anderson Ray, Jeffrey Baylon Mitchell, 89, WW2, veteran, senior, elderly, defensive gun use, dgu, guns,
"He'd threatened to kill me 2-3 other times over the last 12 months," said Calvin Ray. "So I wasn't taking any chances of him killing me after busting my door open and coming in on me."

Saturday evening (July 12th) Jeffrey Baylon Mitchell of Wake Forest, North Carolina went over to the home of his 89-year-old landlord Calvin Ray, a World War II veteran, to complain about an air conditioning unit taking too long to repair.

Mitchell headed over to Calvin's home. When Calvin saw Mitchell through the peephole, he knew it was going to be trouble.

"I went back and got my gun," he said. "And came back up here. Next thing I knew he backed back and kicked the door open, broke all that, and said 'I'ma get you.' So I let him have it and I shot him."

Mitchell's 12-year-old son heard the gunshot, ran over, and saw his father wounded before authorities arrived.

Calvin was taken into custody and later released because he was acting in self defense.