Get Your Finger Off The Trigger...
Concealed carry mom defends son, shoots attacker in the buttocks (Delaware)
Posted by: Jason
Tweets
Resource: http://www.csnphilly.com/article/woman-returns-home-shoots-squatter-police 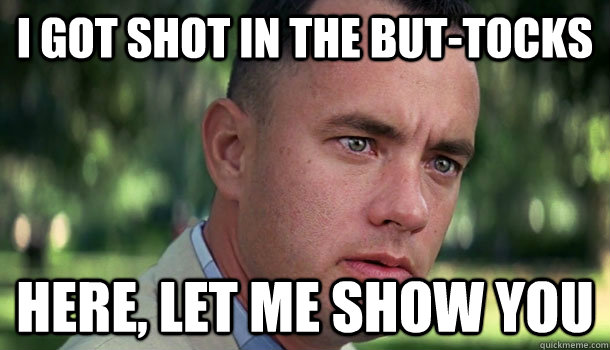 Tags: Gregory Alexander, woman, teen, homeless, squatter, defensive gun use, assault, dgu, conceal carry license,
Even in 'Shotgun' Joe Biden's home state they know that there are better ways to deal with attackers than randomly firing all your ammunition into the air.

A Stanton, Delaware woman and her 17-year-old son stopped by the home of her deceased father around 6a.m. yesterday morning (August 5th). The mother and son were there to continue renovations they began on the boarded up house shortly after her father passed.

Instead of an empty house, the woman found 21-year-old Gregory Alexander asleep in the bedroom - kind of like Goldilocks in the wrong bed. When the woman called out to Alexander he woke quickly and was immediately lashed out at the woman and her son.

"The male subject woke up, there was a physical confrontation between the female homeowner, her son, and the male subject," one Delaware State Police officer said.

With her son at risk, the woman drew her concealed handgun and fired a single shot. Right into Alexander's buttocks.

Alexander fled the house, leaving a blood trail into the woods. Police arrived and used both canine units and helicopters to locate him in a nearby trailer park.

"All the better for her. If someone's going to break into my house, I'd want to do the same thing. You gotta protect yourself and do what you can do," said neighbor Lou Fournarakis.

Alexander was transported to a nearby hospital for treatment and the State Attorney's office is waiting for more information from police to make a determination if charges will be filed against the mother.